Large Format Printing...is it for you?


For reference and your edification, here is some background which may be in accord with your own situation.

I started printing, like many, in the darkroom. I remember other photographers telling me how much I would love it, speaking in romantic terms about watching the image appear. Well, exit fantasy, enter reality. Working in a dark, smelly room...alone is not my idea of romance. I hated it!

My first printer was the Kodak 8500. A beast of a portable dye-sub printer; capable of wonderful color on an assortment of paper...provided glossy is your definition of assortment. I purchased it with my Kodak SLRn; also capable of wonderful color.  Truth be told, I have yet to see better color from a digital camera. It is no wonder Leica went to Kodak for their sensor. 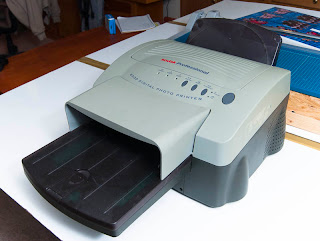 Results were a mixed bag. The big issue faced, was the ancillary equipment used to process the images. At that time, image processing was done on a Dell Inspiraon, 15" laptop with LCD monitor...which was not calibrated.  Needless to say, images shot in the studio produced the best results, as little color correction was required. Outside portraits, done in shade were the worst.  Add to the mix the variety of image issues associated with the first full-frame sensored camera to pass the 13mp count and no AA filter... One thing is for certain, the Kodak-team provided an in-deapth need to understand RAW processing. At one time I was using 6 different RAW converters.

As with the darkroom, printing yielded little satisfaction. It was a necessary evil for that quick print.

As the business grew, and the processing equipment improved, I replaced the laptop with a [relatively high-end] Dell with a wide-gamut monitor. Cameras and RAW converters produced better images. I'd settled on RAW Shooter, later purchased by Adobe, prior to their release of LightRoom, to process files.

While walking through Staples, I saw a Canon 9500 on sale for $99. It was their last one. They were getting rid of it. To the office it went. Combined with my new cameras and computers, I was astounded by the results. For the first time, prints being done [in my office] were better than those coming from my lab! With the new found confidence in my printing ability, the search for a larger printer began. 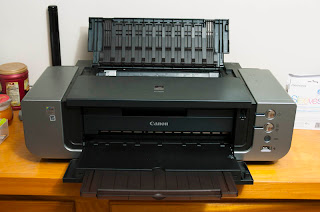 I played with various business models in an attempt to cost justify a large printer. I'd wondered if I printed enough to, a) justify the cost; b) run it enough to prevent clogging; c) had enough ability to produce quality prints, consistently, in a variety of shooting conditions.

As stated in the beginning of this post, perhaps you find yourself in this same, or similar, situation? If so, the next post may be of help.